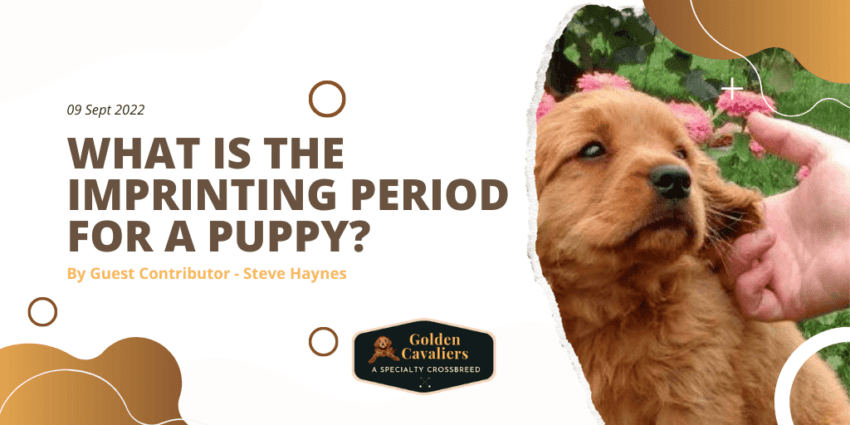 Thanks to Steve Haynes, dogspecialist.com, Guest Contributor, for this article about the imprinting period.

Have you ever wondered how an owner gets their dog to sit and come when in called? What about the leash-free dog park where dogs are behaved and play as their owners watch from the sidelines? Puppies and dogs don’t come out of the gate that way. There’s an important phase in your puppy’s life, and it’s the imprinting period.

So, what does it mean to imprint, and what is the imprinting period? The imprinting period with puppies happens between 6 and 16 weeks old.  During that period, their brains are particularly adept and learning new skills, processing new information, and adapting to patterns in their environment.  In short, puppies learn extremely quickly during this phase of their life, and the science of dog training says it is wise to take advantage of these unique abilities puppies have during this time.

Imprint begins early. Much earlier than the world once thought. Would you believe that just 10-15 years ago, puppy training didn’t start until the puppies were six months old? Crazy, right? It’d be kind of like humans not learning to tie their shoes until they were twelve or learning to drive at eight. Backward, huh?

Starting training this late, at 6 months old, means the puppy had plenty of time to learn bad habits during its imprinting phase. But we go with what we know, and in the way back machine – the 1930s and 40s, the theory was that young puppies say 8 to 12 weeks or so, couldn’t pay attention long enough to learn anything.

By six months old, every dog has habits formed, most of them bad habits. If you wait until then, you’ll be wasting time and money on breaking bad habits rather than instilling good habits from the beginning when they are young and pick up new things much faster. How much easier would it be to leash train a 10 lb puppy than to try to control a wild 40, 50, 60, or 70 lb dog?

When we start working with a dog around that age, we’re going to spend a lot of time working on correcting those bad habits instead of never allowing them to begin in the first place. The imprinting period of puppies is where we should, and now do begin training so that we have the opportunity to show them the right behaviors from the beginning and have those behaviors built into how the pup sees the world. For a quick example, wouldn’t you rather teach a 10-pound puppy to walk on a leash than a 70-pound overexuberant maniac of an adolescent lab?

After fifty-one years in the dog training business, I say balderdash to the old ways and find that puppies as young as 8-9 weeks are capable of learning skills and commands. By working with them in short 10-15 minute increments, and bite-sized learning, puppies can train throughout the day.

Puppies want to please you. But they must understand who the alpha of the family is and that it’s you. In my years as a trainer and behaviorist, the best time to start training during the imprinting phase is at 8 -9 weeks, the Golden Age of training.  Working with young dogs then teaches them that we are going to ask strange things of them (put their bottom on the ground, look at us when we say their name, move toward us when we back away a bit) and when they do that we will reward them for their work.

In my training business, I schedule clients far in advance of when they got their pup so that we could get started immediately when the puppy hits that magic 8-9 week old time slot, which is usually when they arrive in their new homes.  Puppies at this age have a few limitations (attention span/getting tired/…), and they can’t do everything perfectly yet, but they can quickly pick up commands and concepts.

This is the first in a series of weekly articles about the imprinting phase for your puppy, what it means for instilling good habits, and how the right training can ensure happy, healthy pups and their people. Check back with us next week for what to expect when you’re expecting a puppy, training tips, and more.

2 thoughts on “What is the Imprinting Period for a Puppy?”