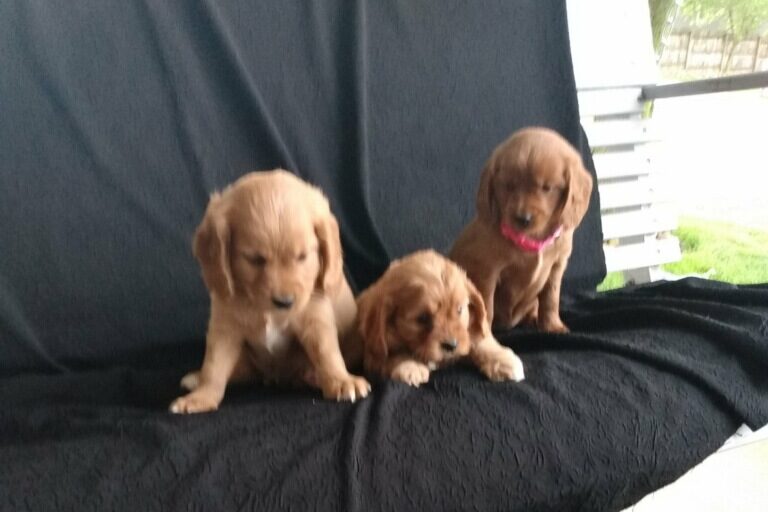 We bought a female pup from the April 2020 Molly-Prince Litter whom we affectionally named Watson. The customer service experience was exceptional, the puppy adorable and well-nourished, although we have had a few medical/behavioral issues which have required more effort than expected–even for a pup!

The intake process and communications with Lisa from Golden Cavaliers was flawless. She kept us in the loop, sent regular pictures along the way and gave clear instructions regarding payment and pick-up. We requested some early neurological stimulation (regular handling, sensory experiences) so the pup would be less reactive and prepared to be a therapy dog. Andrew went above and beyond and agreed. Our later handling of the pup strongly suggested she was familiar with the touches and she’s been a dream when cutting her nails or holding her in weird positions.

When we arrived in Ohio to pick up our pup, Watson came up to me, curious and interactive. Andrew was pleasant and respectful. The outside facilities looked well-kept and the other dogs were happily running freely together. The dam Molly was an outside dog and not particularly trained for inside behavior, but she liked scritches and attention and didn’t nip or growl at a weaned Watson who still tried to suckle (with a full set of sharp teeth!). Our pup bonded to me right away and we had the expected early barking and crying when we left the pup early on. After a few weeks of crate and desensitization training, our pup still had persisting separation anxiety complete with crying, messing in her crate or play areas, tail between legs, ears back, inconsolable.

She was food motivated and caught onto simple commands very well, but we couldn’t leave her alone. Even just taking a 5 min shower would send her way past whining and onto full dog-scream panic, taking minutes after being reunited to calm down. We hired a behaviorist/trainer and have stepped up our subthreshold training, but we still can’t step outside our front door without her anxiety being triggered. She is 5 months old now and she still can’t be left alone. She has developed guarding behaviors including growling and even snapping/nipping. She guards preferred food items, my lap, and preferred toys when she feels others are too close. She has never bitten down to break skin, but we are sad to say she will most likely not be able to be a therapy dog because of those behaviors. We certainly have been trying to train it out (even with a pro trainer), but, if anything, the behaviors have escalated a bit. She tested positive for Giardia on her first fecal test (@ 4 months), so we had to postpone her full socialization outside even further than the recommended 16 weeks.

The vet said it was likely acquired early through the breeder since we hadn’t let her outside on the ground at all except our enclosed patio area. We did a couple rounds of antibiotics and she’s since had 2 clear tests. In addition to anxiety when we step out of view, she also has hypersensitivity to sounds which is tough in an apartment complex. While walking on a leash, if a car goes by or another loud-ish sound happens, she tries to jump up on us. Sometimes she is redirectable and sometimes she’s not. Watson tolerates, but is not rewarded by, pets. She’s a great little work buddy, though as her favorite place to be is on our laps. Figures, as King Charles Cavalier Spaniels were bred to be lap/foot warmers. 🙂 Everywhere we go, Watson brings joy to people because she is so adorable and so soft. I’ve been approached my Instagram brokers(?) trying to get me to make her a social media star. I frequently get asked her breed because she is so unique and beautiful. Ultimately, we’ve had pros and cons with our Golden Cavaliers experience. We were over the moon for the first few weeks, but when we realized the separation anxiety and guarding behaviors weren’t fading, our experience was negatively impacted. At the end of the day, my recommendation is: Proceed With Caution. Make sure you’re prepared for the cutest baby in existence with above “normal puppy” training investment. She probably would have fared better in a wide open yard with other dogs and humans around pretty constantly.